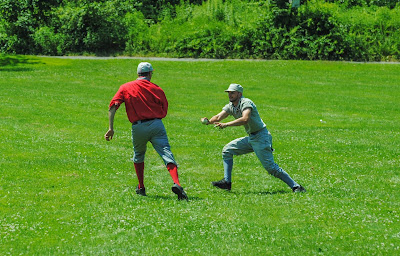 SALEM, Mass. – In a tune-up one week ahead of the 10th Annual Gettysburg National 19c Base Ball Festival, Providence squared off against the Mudville Base Ball Club at the Salem Willows Park this past Saturday, July 13. The Grays swept the day, winning game one (1864) 16-7 and taking game two (1865) 21-3 to improve to 14-8 on the season. This Saturday and Sunday (July 20 & 21), Providence will return to the celebrated festival in Pennsylvania for four games at the historic Schroeder Farm, facing off on Saturday with the Monarch BBC of Moscow, Ohio, as well as the Iron Sides of Allegheny, PA. Then, on Sunday, the Grays will see action against the Fair Plays of Talbot, Maryland, and finish the weekend with a match against the Gettysburg Generals. Providence will help commemorate a decade of historic base ball at what has become one of the premier festivals in the country. 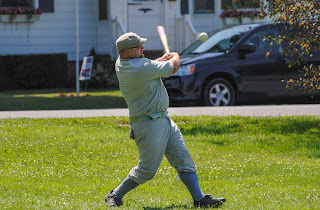 In Salem last Saturday, the Grays established momentum for this weekend’s festivities, taking both games from the talented Mudville squad. In the first game (1864), Mudville struck first and tallied two aces to take a quick lead. Providence responded with six runs on as many hits, including singles from left fielder Connor Pirruccello-McClellan, captain Brian Travers, second baseman Mike “Banquet” Swanson, catcher Aidan Pirruccello-McClellan, pitcher Jon “Bones” Henson, a double from right fielder Ryan “Loggy” Logsdon, and a sac fly from short stop Mike Duggan. Third baseman Greg Smith batted in another run for the Grays in the following frame off a double that scored Travers from second. Center fielder Johnny Carlevale and Connor each singled and scored in the third to set the score at 9-2 in favor of Providence. 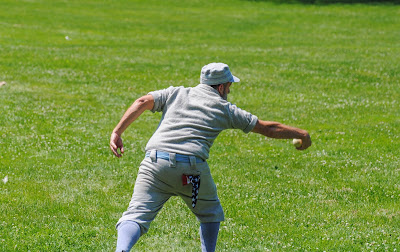 Mudville narrowed the gap in the fourth inning, plating four runs on a couple of clean hits and some Grays’ defensive missteps, while Providence added one to make it 10-6. Mudville held the Grays scoreless in the fifth, but the Rhode Islanders returned to form in the late frames, scoring six more runs across their last three innings, featuring doubles from Smith and first baseman Dave “Oppy” Oppenheimer, two singles from Aidan, a final inning single from Connor and a sac fly from Bones. The Grays defense behind Bones’ pitching fared well in game one, holding Mudville scoreless in all but three innings, for a 16-7 final.

Providence started hot in game two (1865), batting first and tallying fifteen aces in the first frame, with every Grays striker recording at least one hit, including singles from right fielder Jerry McCormack, center fielder Jamie Maynard, pitcher Tony McClellan, left fielder Zach “Wild” Oppenheimer, and a double off the bat of Travers. Mudville got on the board in the bottom of the second, matching an ace to the Grays single tally in the top to make it 16-1. 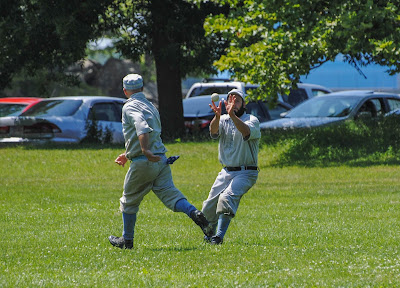 The Grays scored two more in the third off hits by Connor, Banquet, McCormack, and another double from Travers. Three more runs crossed the plate for the Grays in fifth, as Banquet recorded an RBI and pitcher T. McClellan aided his own cause with a 2-RBI double. Meanwhile, Mudville managed just two more runs (fourth inning) as the Grays defense, in support of the swift pitching of McClellan, limited the effectiveness of their lumber: Providence 21, Mudville 3.

The Gettysburg National 19c Base Ball Festival has arisen as the preeminent gathering of historic clubs from throughout the region and beyond. As the festival marks its tenth anniversary, a record 24 clubs from 11 states will compete in the heat and humidity of central Pennsylvania at the Schroeder Farm (965 Pumping Station Road, Gettysburg), legendary as a site where Confederate troops were gathered in advance of Pickett’s charge and as a filming location for the movie Gettysburg (1993). 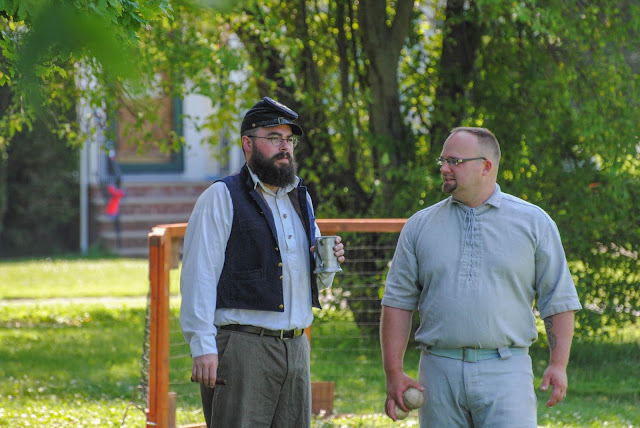 The Providence campaign commences at 10:15 on Saturday morning vs. the Moscow Monarchs from Ohio, followed by a match at noon against the Iron Side BBC of Allegheny. The Grays lead off the Sunday schedule in the early slot, facing Talbot at 8 a.m., then conclude the weekend with a final match against the Gettysburg Generals starting at 9:45. Follow the weekend action on the Grays Facebook page and check on the team’s progress as the season continues at ProvidenceGrays.com.