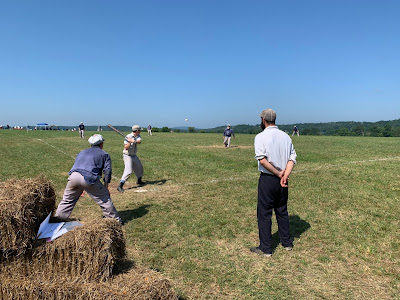 GETTYSBURG, Pa. – Despite a heat index in the triple digits, the Providence Grays departed the 10th Annual Gettysburg National 19th Century Base Ball Festival this past Sunday with three wins out of four games to improve to 17-9 on the season. Providence started grand on Saturday with a 22-6 victory over the Monarch BBC of Moscow, Ohio, as well as a 15-10 defeat of the Allegheny Ironsides of Pennsylvania in the matinee match. Sunday morning, the Grays dropped the early game to the Fairplays of Talbot County, Maryland, 10-6 but outlasted the Gettysburg Generals 10-9 in game two to secure festival success for the Rhode Island squad.

This Sunday, July 28, Providence will host an exhibition of 1884 base ball with the Connecticut Bulldogs before the start of the Hartford Yard Goats vs. Akron Rubber Ducks game at Dunkin’ Donuts Park, 1214 Main Street in Hartford. The Yard Goats are the Double-A affiliate of the Colorado Rockies and welcome this exhibition of the historic game as part of the Celebrate New Haven festivities on Sunday. Providence and Connecticut will take the field at 11:30 with the minor league matchup to follow at 1:05 pm.

The Grays wasted no time in game one in Gettysburg on Saturday, scoring five runs off singles from center fielder Johnny Carlevale, catcher Aidan Pirruccello-McClellan, right fielder Ryan “Loggy” Logsdon, short stop Mike “Banquet” Swanson, and a double driven deep off the bat of third baseman Greg Smith.  Providence added two more in the second with clean singles from Smith and captain Brian Travers, a sacrifice bounce out to right from second baseman Kai Henson, and another ace driven in by catcher Aidan. The Monarchs plated two in their second to make it 8-2 Providence early. 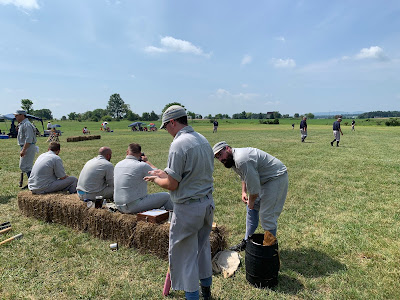 The Rhode Islanders built their lead in the third with seven more runners crossing the dish as the offense sizzled in the late morning swelter. Loggy and Banquet ignited the inning with back-to-back doubles to open the frame, followed by a base knock each for left fielder Connor Pirruccello-McClellan and Smith. Henson pushed the fourth hit of the inning into the gap in right-center for 2 RBI, and Aidan smacked a double to cap the hitting and scoring to make it 15-2 in favor of the Grays.

Moscow managed only two runs in each of the next two innings against Tony McClellan’s pitching, as Providence added seven more in their fourth to put victory out of reach for the Ohioans. Left fielder Jamie Maynard, Connor, Travers, right fielder Jerry McCormack, and second baseman Jon “Bones” Henson each picked up hits as the Grays coasted to the 22-6 final.

Game two on Saturday provided an increased challenge for Providence, with the mercury rising and Allegheny stepping onto the field on fresh legs for their first game of the day. The Ironsides struck first and tallied four quick aces off Jon “Bones” Henson’s pitching. Providence was scoreless through their first two frames but also halted the Ironsides offense, as the score held at 4-0 as the third inning commenced. Providence bats came to life in the third as five runners scored, along with three more in the fourth, four tallies in the fifth, and three more in the sixth. Allegheny kept it close, scoring four times in their fifth inning to fix the deficit at seven, 15-8 after six. The Grays killed a seventh-inning Ironsides rally after allowing two runs for a final score of 15-10. 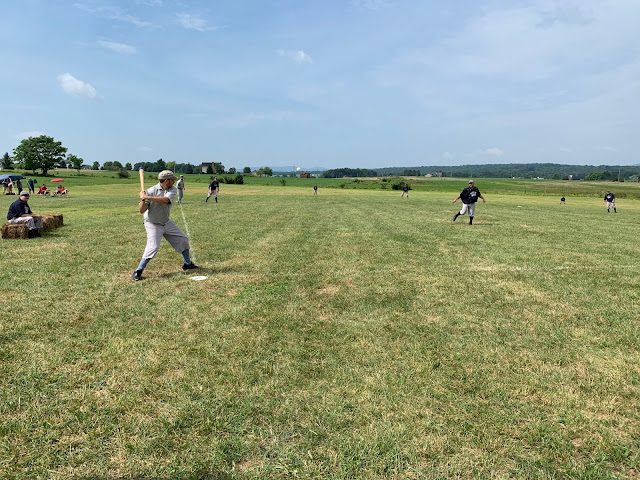 The early Sunday morning match with Talbot found a sluggish Grays squad unable to tally a single ace through eight innings. Talbot struck well against Bones Henson’s pitching and capitalized on Grays’ defensive troubles, scoring three times in the first inning, twice in the fourth, and three more in the sixth. Providence allowed no Talbot scoring in the seventh and eighth to make it 8-0 in favor of the Fairplays going into the final inning. Talbot tallied two more aces in the top of the ninth, but the Grays wouldn’t relinquish the match so easily, as the Providence offense finally rose to the occasion. 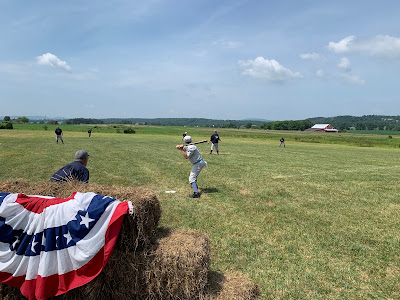 Trailing 10-0 with three hands to expend before the game was complete, the Grays made it interesting for the powerful Maryland squad. Smith got it started with a double, followed by singles from K. Henson, Aidan, Bones Henson, and Carlevale. Banquet and first baseman Dave “Oppy” Oppenheimer each smacked doubles in the ninth as well, to fix the final at a respectable 10-6 in favor of Talbot.

The final game of the weekend featured Tony McClellan in the pitcher’s box for the Grays, and the Gettysburg Generals jumped out to 6-0 lead in the first inning. Banquet and T. McClellan each reached base on singles in the second, and Oppy hit an RBI double. Gettysburg put up one more run in the second to make it 7-1 after two. Providence tied it up in the third, with six runs scored with singles from K. Henson, Travers, McCormack, and Banquet. Gettysburg could not plate a run in the fourth and fifth innings, while the Grays plated one more in each of those frames for a slim lead, 9-7 after five.

The Generals halved their deficit in the sixth, tallying a single ace and defending the disc from Providence to keep the match tight, 9-8 after six. Banquet reached base in the seventh and scored on a sacrifice RBI from Oppy to give the Grays a bit of breathing room, 10-8, where the score remained as Gettysburg stepped to the plate in the top of the ninth. The Generals struck well and scored a run before Providence put one hand down with runners in scoring position. The next Gettysburg batter hit a sharp grounder back to pitcher McClellan who threw to Travers at first for an out. Travers caught the Gettysburg runner attempting to score from third and shot a beam of a throw to catcher Aidan in time for the tag to complete the 1-3-2 double play to secure the victory as well as the winning record at this year’s festival. 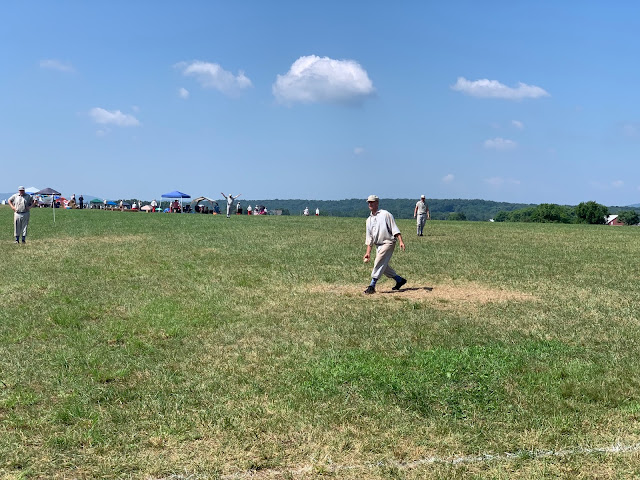 This Sunday, July 28, join the Grays for a fun exhibition of the 19th century overhand game as they take on the Connecticut Bulldogs at Dunkin’ Donuts Park in Hartford. Come early for the history and stay for the minor league contest. The excitement begins at 11:30. Follow along on the Grays Facebook page and at ProvidenceGrays.com.