RISING SUN, Md. – In their first-ever appearance at the Weekend at the Winery 1864 festival in Rising Sun, Maryland (June 22 – 23), the Providence Grays split the weekend, going 2-2 with a pair of triumphs over the storied New York Mutuals vintage club. The Grays take the field again this Saturday (July 13, 11 a.m.) hosting the Mudville Base Ball Club (Holliston, Mass.) at the Salem (Mass.) Willows for two underhand contests. 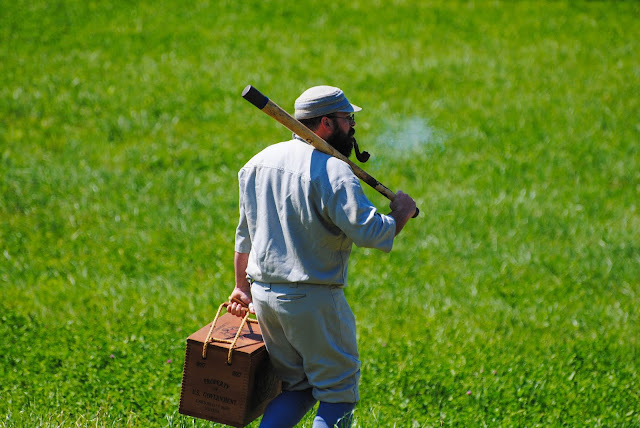 Game one for Providence at the Dove Valley Winery was against the Mutuals, and the New York nine held a slim 2-0 edge after the first two frames. However, the Rhode Islanders had a resounding third inning, plating nine runs as captain Brian Travers started things off with a two-run single scoring catcher Johnny Carlevale and rightfielder Ryan “Loggy” Logsdon. The Grays batted around, and Travers went on to drive in four runs in the frame as well as RBI from Gil Faria and Jay Gildea to take a commanding lead.

Four scores over the fourth and fifth extended Providence’s total to 13, but New York chipped away making it 13-5 after five full. Another four Mutual tallies in the final two innings made it a four-run game, but the Grays shut down the rally to open the weekend with a victory. 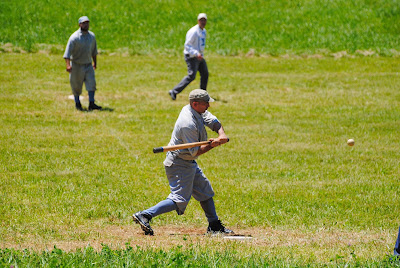 Providence faced off with the host Rising Sun Base Ball Club to wrap up day one and stranded the bases loaded after singles from Travers, Mike “Banquet” Swanson, and Jerry McCormack in their half of the first. The hosts capitalized, racing out to an early 7-2 advantage after three stanzas. The Grays then went down one-two-three in the fourth and fifth while Rising Sun built a 10-2 lead, and it proved insurmountable as they claimed an 11-6 win.

Sunday began in the same fashion as day one with the Grays battling New York once again, but this time the Mutuals pounced first with five runs in the top of the first. Providence got two back in the bottom half and then took the lead in the second as six of the first seven batters in the inning scored, beginning with a single from Jon “Bones” Henson. Faria followed with another base-hit and Kai Henson drove in Bones to start the scoring. Carlevale, shortstop Mike Duggan, McCormack, and Loggy all collected RBI as the Grays led 8-6 after two.

The Mutuals hung in there though, keeping pace as they trailed just 12-10 after four innings. Providence padded their lead with a seven-run sixth behind hits from K. Henson, Carlevale, McCormack, and Loggy as well as a few New York errors. This pushed their edge to 12 (22-10) after six and it was enough for the Grays to pick up their 12th win of the season. 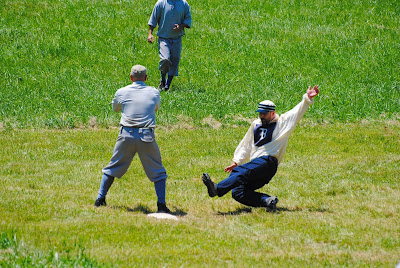 The final game of the weekend saw Providence square off with the Brandywine BBC of West Chester, Pennsylvania, who jumped out to a quick 2-run lead in the first frame. The Grays pulled ahead in the bottom of the first, scoring three runs off hits by Carlevale, Travers, McCormack, and a sac fly from Faria. A scoreless second for both squads maintained the margin before Brandywine tallied three in the third to Providence’s one to fix the score at 5-4 in favor of West Chester after three. Good defense on both sides produced a scoreless fourth inning, but the Pennsylvanians finally broke through in the fifth, plating 7 runs to take a significant 12-4 lead. The Grays were unable to tally an ace in their fifth frame but pushed five more base runners across home plate through the last four innings, while holding Brandywine to just one more run: West Chester 13, Providence 9. 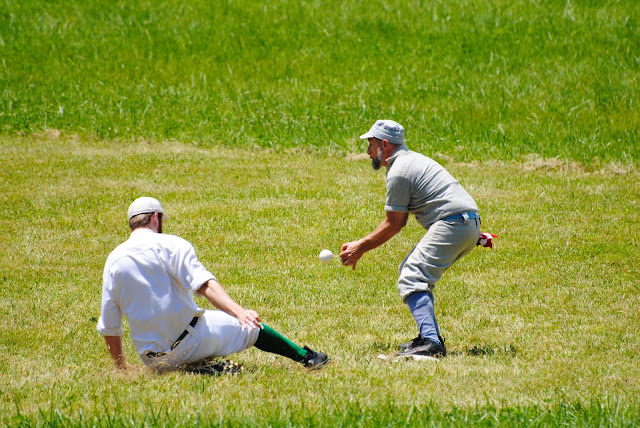 The Grays return to action this Saturday (July 13) against the Mudville Nine at the Salem Willows in Salem, Mass. Providence welcomes the doubleheader with the gents from Holliston as ample preparation for the festival in Gettysburg (July 20-21).

Nestled on the waterfront at the far end of Salem Neck, the Willows (165 Fort Ave, Salem, Mass.) offers a spectacular location to watch some 1860s base ball and enjoy the adjacent beach and family amusements. Join us for our first pitch at 11 a.m. and follow the rest of the Grays season on the Facebook page and at ProvidenceGrays.com.