Grays Sweep Union, Prep for Round Robin With Beaneaters, Quarrymen

PROVIDENCE, R.I. – The Providence Grays faced off against the Boston Union BBC last Saturday (May 19) in the rain at Fallon Field in Roslindale for an ‘84/’64 doubleheader, walking away with a sweep on the day to improve to 7-3 on the season. Game one (1884) was down to the wire, with the Grays eking out a 10-9 victory, while game two (1864) saw Providence succeed handily, 25-1.

This Sunday (Jun. 2), the Grays will travel to Chariho High School (Wood River Junction, R.I.) to participate in a round-robin event, squaring off against the Boston Beaneaters in an 1884 contest in game one, then meeting the Westerly Quarrymen (in their inaugural season) for an 1864 match as the third and final contest of the day.

In game one at Roslindale (1884), leftfielder Mike “Banquet” Swanson sparked the offense in the first inning, reaching base on a single, stealing second, and advancing to third on a passed ball. Shortstop Mike “Defense” Duggan brought him home with a base knock of his own to get the Grays on the board early. The Union fought hard, tallying six aces across the first four innings to keep it competitive. Providence plated five runs in the third, with a lead-off walk by centerfielder Johnny Carlevale, who stole second, annexed third when captain Brian Travers reached base on an error, and then scored on a sacrifice fly to center off the bat of Banquet. Travers then scored when Duggan reached base on an error in the inclement weather. Rightfielder Jerry McCormack rounded out the scoring for the frame with a 2-RBI double to bring the Grays’ total to six after three innings.

Providence tallied two more in the fourth, with singles and runs scored by catcher Charlie Dryer and Carlevale. Boston added three more in the fifth as the Grays suffered their own problems in the mud from the deluge to make it 9-8 in favor of the home squad. Third baseman Dave Oppenheimer and McCormack both reached base in the Grays’ fifth off clean singles, and rookie RJ Zimmerman reached base on an error to load the bases. Dryer drew a walk to knot the score at nine all, then pitcher Connor Pirruccello-McClellan smacked a base hit to score McCormack from third for the 10-9 win.

The Grays opened game two (1864) with a four-run first off singles from Carlevale, McCormack, rookie Ryan Logsdon, Oppenheimer, Zimmerman, and Swanson, and a double off the bat of Travers. The Union plated one of their own in their first, and their scoring would stop there. Providence would plate five in the third and seven more in the fourth before adding an additional nine runs in the fifth to round out the score at 25-1 to conclude the rain-shortened match. 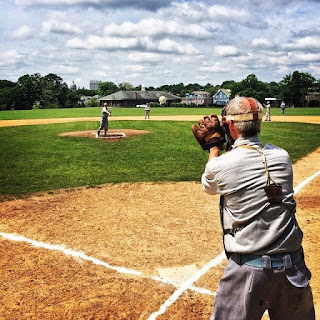 Next up, Providence will travel to Wood River Junction to meet the Boston Beaneaters for the first time this season then close out the day against the newly-minted Westerly squad upon completion of the host club’s game with Boston. First pitch for game one is 11 a.m. Follow the action on the Grays’ Facebook page and at ProvidenceGrays.com.