Providence Splits a Pair with Boston, Readies for New York 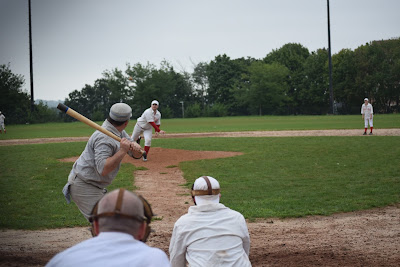 PROVIDENCE, R.I. --  Ronan Park in Dorchester was the scene last Saturday, September 15, as the Grays visited the Beaneaters for a doubleheader, with Boston coming out on top in the first game (1886 rules) and Providence hanging on for a win in game two (1864 rules). The Grays will take their 21-9 record on the road this Saturday, September 22, for a doubleheader rematch with the Mutual BBC of New York as part of the Long Island Fair at the Old Bethpage Village Restoration.

Game one last Saturday was a marathon, clocking in at just under four hours to complete the nine innings. Providence started strong, scoring five unanswered runs in the first two innings, before Boston’s bats awoke to cut the Grays’ lead to two. The fourth inning saw Providence extend the lead, as both Johnny Carlevale and Mike “Banquet” Swanson singled to set up a 2-RBI triple off the bat of Greg Smith. David “Oppy” Oppenheimer pushed a base knock to bring home Smith, adding three tallies for the Rhode Islanders in the frame. Boston came back with their own rally to take a lead, as Providence plated a single run in the fifth. The Grays would keep it interesting, adding five runs in the sixth, highlighted by RBI singles from Captain Brian Travers and Jon “Bones” Henson, but Boston managed to hold the Grays scoreless over the final three frames for the 21-15 victory. 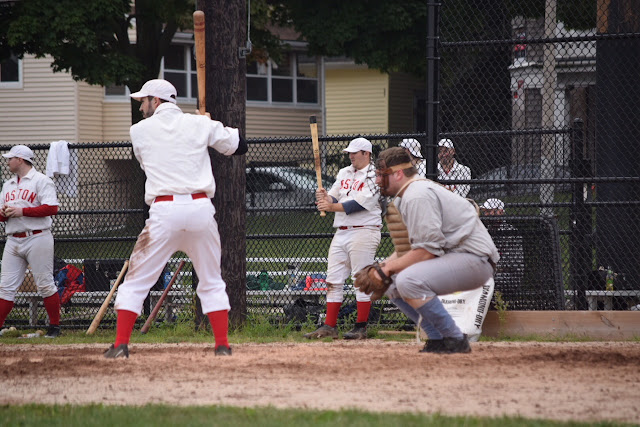 Game two was a sprint in comparison to the ’86 match, and Providence salvaged the day with a 17-11 win to make things even. The Grays tallied one in the first, then unloaded in their second frame, plating seven off hits by Carlevale, Banquet, Smith, Oppy, Bones, and Drew Ewing. Travers and Henson each scored a run in the third and fourth innings respectively before Providence built a convincing lead with another seven-run frame in the fifth. The Grays defense behind Henson’s pitching held Boston to four runs over the first four frames, but the Beaneaters scored seven of their own late in the game to finish within six, 17-11 final score.

Providence hits the road this weekend to play two at the storied Old Bethpage Village Restoration, for a repeat of the Sunday match-up during the Doc Adams Festival (August 5). The New York Mutuals will play host for the doubleheader, featuring an 1884 match starting at 11 a.m., followed by a ’64 matinee. The last meeting of these squads in Bethpage early last month ended in a Grays sweep of the day, as Providence took the overhand game 17-11 and walked off with a 9-8 win in the underhand match. The play between these two squads is always lively, so plan for an action-packed day at the heart of the festivities in Old Bethpage on Saturday, as the teams take the field during the Long Island Fair. 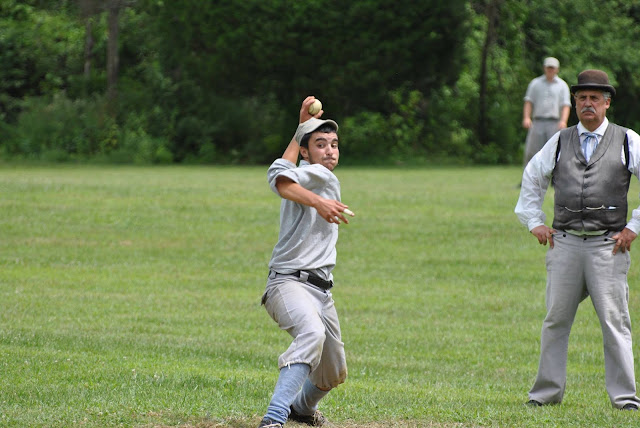 The Long Island Fair is the official New York State sponsored County Fair for Queens, Nassau and Suffolk Counties and was first held as the Queens County Fair in 1842. Exhibits, vendors, and activities for children of all ages will be steps away from the Hewlett Grounds (site of the doubleheader). The event offers an excellent opportunity to explore the history of base ball as well as Long Island all in a single day. Location: 1303 Round Swamp Road, Old Bethpage, New York 11804. Admission to the fair is $15 for adults, $13 for seniors and children (ages 5-12), free for children under five. First pitch is 11 a.m.