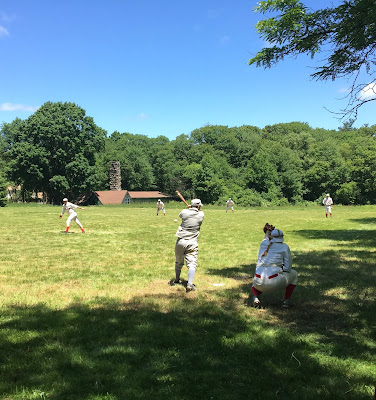 MILTON, Mass. -- Looking to continue their stellar opening stretch of the season, the Providence Grays vintage base ball club visited the Boston Beaneaters for two matches at the historic Eustis Estate just outside of Boston. The Grays maintained last week's momentum, picking up a 27-3 victory in the first game (1886 rules) and coming back for a 15-6 triumph in game two (1864 rules). Providence extended their win streak to six games and improved their overall record to 9-1.

Captain Brian Travers singled and eventually scored via three passed balls to give the Grays a 1-0 advantage after the top of the first. Then, in the second, singles from Jon "Bones" Henson and Aidan Pirruccello-McClellan, paired with a few defensive mistakes, led to three runs in the frame. Pitcher Kai Henson went on to retire the side in order in the bottom half for a 4-0 lead after two.

The offense caught steam again in the third with third baseman Greg Smith and left fielder Johnny Carlevale driving in runs as part of a five-tally inning. Boston threatened in their half with runners at first and third and no outs, but short stop Mike Duggan corralled a pop-up and doubled up the stealing runner at first. Henson followed with a strikeout to keep the hosts scoreless.

Providence continued the scoring with three more in the fourth as Carlevale and Bones collected RBIs, while the fifth saw a solo home run from Duggan into the trees in center to extend the lead. The Grays weren't done, however, as they plated 12 runs in the top of the sixth featuring knocks from catcher Charlie "Suds" Dryer and right fielder Dave Oppenheimer to spearhead the hitting spree.

Neither squad scored in the first inning of game two, but Boston got things going in the top of the second with a pair of aces for a 2-0 lead. The Grays would answer in the bottom with two scores of their own highlighted by a Mike "Banquet" Swanson RBI double to tie things up. The Beaneaters immediately regained the advantage in the third as well-placed hitting made the score 4-2 after two and a half. 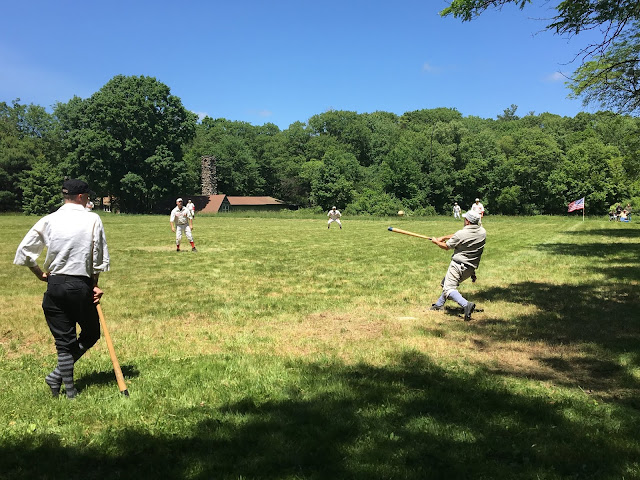 The fourth and fifth saw no runner cross the plate for either side, but the bottom of the sixth held plenty of action as five Providence runs came across behind back-to-back home runs from Duggan (second of the day) and Smith. Carlevale joined the long ball club in the seventh with a lead off solo shot and Smith notched his second big fly of the day in the eighth to give his team a comfortable lead late. Mike "Pops" Smith manned the pitcher's box for the Grays and earned his fourth victory of the season.

Next up for Providence is Old Dutch Day at the Smithtown Historical Society (Smithtown, N.Y.) featuring two contests against the Brooklyn Atlantics on Saturday, June 9. The Grays continue their road trip that Sunday (Jun. 10) taking on the New Brunswick Liberty for two matches in Piscataway, New Jersey.