SMITHTOWN, N.Y. -- In day two of the Atlantic Festival the Providence Grays vintage base ball club played two games, battling the Monmouth Furnace Base Ball Club and the Dirigo Base Ball Club of Maine, winning both to improve their record to 5-1 on the young season. The Grays took home a 24-3 victory over Monmouth and followed with a 19-9 triumph in the Dirigo match as their offense posted its two highest scoring games of 2018. 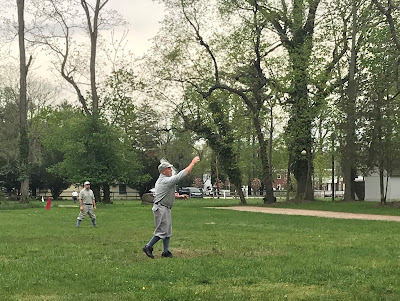 Providence hit the ground running in the first contest as lead off man Cesar Rivera started the bottom of the first with a base knock and captain Brian Travers, the two hitter, drove him in with a double to power a two-run opening frame. In the bottom of the second the Grays tripled their lead, scoring four runs highlighted by a Mike "Banquet" Swanson two-run home run for the team's first long ball of the season.

Six hits and two visitor errors led to seven runs in the bottom of the fourth, giving the Grays an early 13-0 lead. They tacked on two more in the fifth and batted around again in the seventh for seven more scores, essentially breaking the game open.

The Grays' defense played five shutout innings to start the match, with their only hiccup being a rough sixth in which Monmouth put up two runs. The defensive standout of the game was hurler Mike "Pops" Smith who went nine strong innings allowing just three hits, also helping himself out with an RBI double for an insurance run in the bottom of the eighth.

Providence played as the road team in game two and back-to-back walks with a runner on second base gave them a 1-0 advantage after the top of the first. Dirigo answered immediately with three-straight doubles to open the bottom half and they held a 4-1 lead with one inning in the books. Back-and-forth play ensued as the Grays put up a four-run frame of their own in the second, led by a two-run triple from Travers. 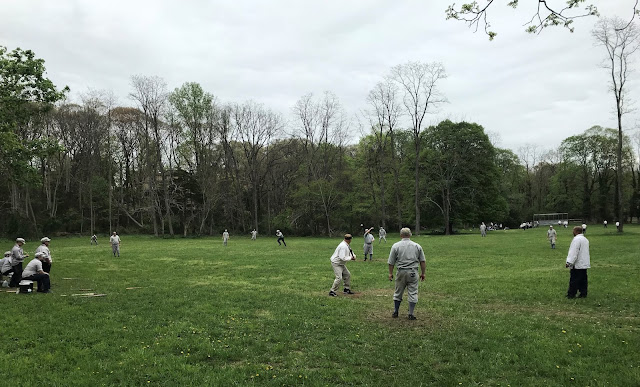 Dirigo gave up two more runs in the top of the third but fought back, tallying one in their half to cut the deficit to 7-5 after three. The score was knotted at eight after five full, but Providence's bats exploded in the the sixth plating five runs as Charlie "Suds" Dryer and Johnny Carlevale had RBI singles and Rivera launched a two-run two-bagger.

The Grays earned a single score in the seventh on a two-out RBI single from Jon "Bones" Henson while adding another in the eighth. Providence then secured four insurance runs in the top of the ninth behind a Carlevale double for two RBI. Dirigo threatened in the bottom half, however, stranding the bases loaded after two foul-outs to catcher Greg Smith. Another great performance on defense came from Rivera as the center fielder in game two.

Next up is a home doubleheader against the Hingham Base Ball Club on Saturday May 26 with the field and start time to be determined.