Grays Down Eckfords to Split Day One of Atlantic Festival

SMITHTOWN, N.Y. -- The Providence Grays vintage base ball club traveled to the Atlantic Festival in Smithtown, New York, for their first road trip of 2018 and split the first day with a well earned 10-7 victory over the Brooklyn Eckfords in game one and nearly completed the comeback in a 10-9 loss to the host Atlantic Base Ball Club of Brooklyn in the second contest. 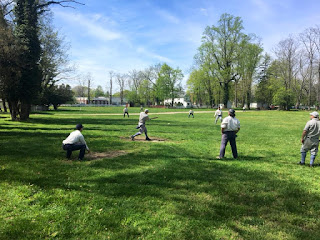 In game one the Eckfords pounced early plating two in the bottom of the first and threatened with runners on first and third in the second, but Providence put an end to the rally as right fielder Cesar Rivera snagged an out on the fly, gunned the ball to first to double up the overeager runner, and first baseman Brian Travers fired to catcher Greg Smith who tagged the runner trying to score from third for the season's first triple play.

The Grays cut the deficit in half with a run in the top of the third, and they maintained the momentum in the fourth as Rivera led off with a triple and Jon "Bones" Henson drove him in with an RBI single to tie the game. Providence then took the lead in the top of the sixth with a two-run frame capped off by a two-out RBI knock from center fielder Kai Henson. As their offense caught steam so did their defense, which held the Ecks scoreless from the second to sixth innings, retiring the side one-two-three in the fourth and stranding a runner at third in the fifth.

Smith smacked an RBI triple well over the left fielder's head to power a two-run seventh as the Grays entered the bottom of the seventh leading 7-2. However, Brooklyn fought back in the bottom half exploding for five runs to tie things up on the back of two triples in the stanza. Providence didn't get down on themselves, bouncing right back in the top of the eighth with three runs highlighted by another two-out RBI from Kai Henson as they took a 10-7 advantage and didn't look back from there. 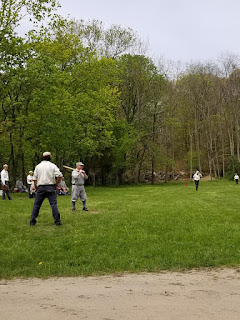 The second contest saw the Atlantics rolling early as they scored five runs over the first four innings while holding Providence scoreless. The Grays finally cracked the scoring column in the bottom of the fifth as a two-run triple from Travers led to a four-run inning, closing the gap to 5-4. Brooklyn went on to pad their lead in the next half with five more tallies including a two-run homer from Anthony Cannino.

Providence trailed 10-4 entering the bottom of the seventh but kept rallying as three Atlantic errors and an RBI single from short stop Charlie "Suds" Dryer gave them three runs to bring them back within striking distance late. Then, in their half of the eighth, the Grays notched two more scores with left fielder Johnny Carlevale leading off with a single and scoring to begin a two-run inning as they trailed 10-9 going into the ninth.

Brooklyn stranded runners at second and third in the top of the ninth and Providence nearly tied it in the bottom half, advancing a runner to third who was then doubled up to kill the rally on a foul-out trick play that ended the game.

Next up for the Grays is day two of the festival in which they battle the Monmouth Furnace Base Ball Club of New Jersey at 10:30 a.m. and follow with a showdown against the Dirigo Base Ball Club of
Maine.