Success at the Fort and a Trip to the Fair, Grays Power On 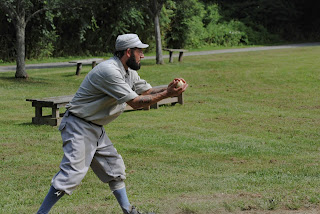 PROVIDENCE, R.I. – The 14th inst. found the Providence nine traveling to the Long Wharf on the harbor in Boston for a 10 o’clock ferry departure to Georges Island. They were met by a delegation of Union club members of this town, who joined them in the 40-minute excursion to play a match of two 1864 games upon the parade grounds of the historic Fort Warren. Through the winds of the morning and before the skies opened in the mid-afternoon, the Grays plated a total of 48 runs while holding their opponents to 20 tallies to emerge victorious on the day.

With this past weekend absent of action, the local nine will travel with anticipation this Saturday the 28th to the Long Island Fair in Old Bethpage to face the Mutuals club of New York in an 1864/1865 twin bill. Those games will commence at 11 o’clock on the Hewlett Grounds in the heart of the Village Restoration.

Grays vs. Unions, September 14th, Fort Warren, Georges Island
On the Island, the first game got underway a bit after 11 o’clock, and the Union presented a body of stalwart players to strike first against the Rhode Island club. The pitching of Jon “Bones” Henson seemed not to trouble the Union strikers with any consternation, as they drove several deep and plated four aces in their opening frame. The Grays, slow out of their chute, put up a zero in their first plate appearances to allow Boston the early lead. 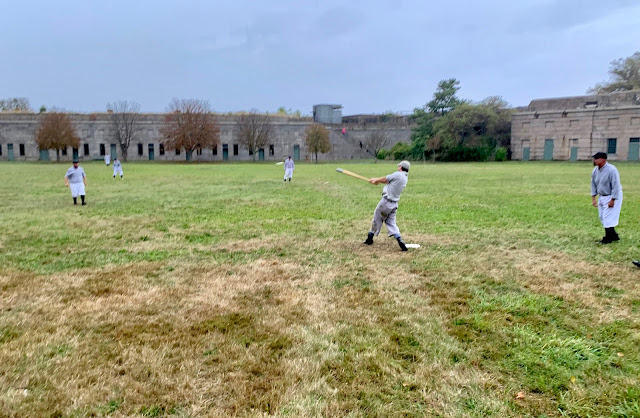 The second inning played out differently, as Bones and the defense found a more skillful disposition, holding Boston tally-free to set up a wealth of heavy hitting in the Grays’ second tries at the dish. Providence plated seven runs, the offensive endeavors beginning with a long ball driven from the bat of short stop Mike “Banquet” Swanson. Before the sphere was returned from the far reaches of the parade grounds, Banquet was on third base. Left fielder Jamie Maynard also contributed a three-bag effort in this frame, and a double cracked off the lumber of second baseman Greg “King” Smith rounded out the extra-base tries in the Providence second. Singles from captain Brian Travers (first base), third baseman Connor Pirruccello-McClellan,  center fielder Dave “Grandpa” Watson, and hurler Henson added to the breakout inning to situate the score at 7 to 4 for the Grays. 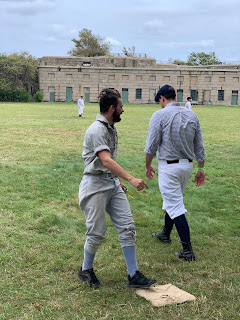 The third inning desired to be an essential replay of the previous, with Providence resisting Boston’s efforts to score and the Rhode Islanders contributing another seven tallies in their turns to extend the margin to 14-4. Grandpa and Bones led off with back-to-back single-base hits, catcher Johnny Carlevale managed a base knock of his own, captain Travers walloped a triple, Connor contributed a double, and Banquet continued his heat with a single to round out the batting successes. The Union added another ace in the fourth, as did the Grays with a run scored by Travers off a base hit from King Smith to keep the pace at 15-5 Providence. Bones and the defense refused Boston base runners from annexing the home dish through the fifth and sixth frames while the Providence bats continued their volleys, plating four more runs in their fifth frame (singles from Bones and Maynard and a double from Travers) and adding two more in the sixth (a Banquet double and a single from right fielder Ryan “Loggy” Logsdon) for a 21-5 Grays’ lead going into the final stretch.

Boston found life in the seventh, working solid strikes on Bones’ pitching to score three aces, but Providence answered back with four more runs to make it 25-8. The eighth inning witnessed a most excellent offensive revival from the bats of the Union nine, exercising great acumen with long drives to plate seven tallies for the home town club and maintaining an interest at 25-15 going into the bottom half of the frame. The Grays mustered a five-run response before their final hand was taken in, and the Union persevered in the top of the ninth, adding two more aces before the decision was realized: Providence 30, Boston 17.

The second game commenced soon after as the wind amplified and the elements grew more inclement. Providence struck first on this occasion, and quickly advanced a six-tally margin on a lead-off single-base connection from backstop Carlevale, two more from Connor and King, a couple of likely weather-induced bases on balls for Grandpa and Bones, and a double from Maynard. The Union came up scoreless in their half of the first frame for a 6-0 Providence lead as the rain settled in. Providence added another ace in their second on a King Smith sacrifice fly ball positioned for the hands of the left fielder that scored the captain Travers who had settled on the third bag after two successful thefts of bases during the slugger’s at-bat. The Union bats held steady in the bottom of the second, adding three aces before returning the Grays to the plate, with the early score of 7-3 Providence. 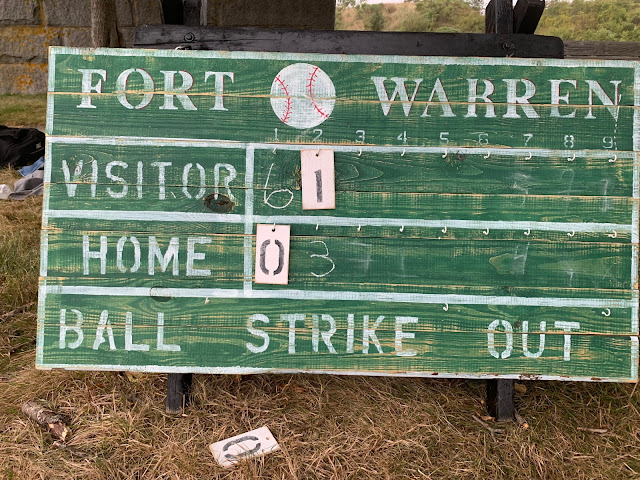 The Grays ignited a flame in the downpour that increased during the third inning, adding 11 runs by splendid free hitting. Providence batted through the order twice with sundry hits and a couple of sacrifice outs to extend the lead to an insurmountable 18-3. The Union relinquished the field as the island in the outer harbor succumbed to the deluge.

Providence vs. New York, September 28th, Old Bethpage Village Restoration
This weekend, the Rhode Island nine will take the field in Old Bethpage versus their friendly foes the Mutual BBC of New York, a club of ballists of the highest order of merit. This Nine hold renown throughout the Northeast with pitching, catching, batting, and fielding all of the most excellent caliber. The 1864/1865 doubleheader with the Grays will prove, as always, to offer great excitement with displays of derring-do for those in attendance. 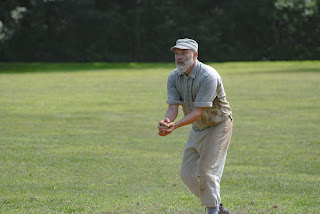 This weekend’s action will take place at Old Bethpage during the Long Island Fair, the official New York State sponsored County Fair for Queens, Nassau and Suffolk Counties. The fair was first held as the Queens County Fair in 1842. Exhibits, vendors, and activities for children of all ages will be steps away from the Hewlett Grounds (site of the doubleheader). The event offers an excellent opportunity to explore the history of base ball as well as Long Island all in a single day. Location: 1303 Round Swamp Road, Old Bethpage, New York 11804. Admission to the fair is $15 for adults, $13 for seniors and children (ages 5-12), free for children under five. First pitch is 11 o’clock in the morning.