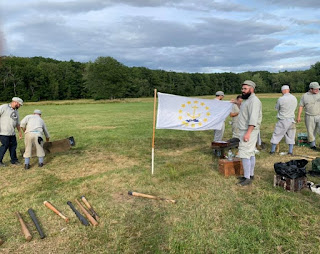 PROVIDENCE, R.I. – The Providence club traveled to Biddeford, Maine, last Saturday, August 31, for a doubleheader of 1864 base ball with the Dirigo BBC and left with two wins, improving to 23-11 on the season. This Saturday, September 7, the Grays will square off with the Beaneaters on the Boston Common in an 1886 match beginning at 10 a.m., immediately followed by an 1864 matinee.

Providence is 3-0 against the Maine club on the season, having taken the final match at Rocky Point before traveling north for the recent twin bill. The Grays came out on top in their one meeting with the Beaneaters this season, an 1884 game on June 2 in Wood River Junction, Rhode Island.

Grays vs. Dirigo, Biddeford, August 31
The squad, family, and friends (including a couple of four-legged club supporters) made the drive north through holiday weekend traffic to face the talented ballists from Maine in two 1864 matches at the Ever After Mustang Rescue on the outskirts of Biddeford. Providence struck first in game one and gained the early lead with a lone ace in the top of the first when lead-off striker Johnny Carlevale (catcher) hit a single, stole second, took third on a balk, and was driven in by the number two hitter captain Brian Travers (first base) on a ball down the first base line. The big bats of Dirigo answered back, scoring two runs off Jon “Bones” Henson’s pitching for a 2-1 lead after one.

Following a scoreless second inning for both teams, the Grays plated two more in the third as Travers and Jerry McCormack (center field) each provided base knocks and crossed the dish on RBI from Dave “Oppy” Oppenheimer (third base) and Ryan “Loggy” Logsdon (right field). Dirigo plated one of their own to keep pace, 3-3 after three. In the fourth, Providence had no luck at the plate while the Mainers put up two more for the slim lead. The Grays responded well in the fifth, with four consecutive hits to open the inning from Carlevale, Travers (double), short stop Mike Duggan, and McCormack (double), scoring three runs in the process to get back on top 6-5. The lead was short-lived, however, as Dirigo put up one more in their fifth off Bones’ pitching to tie it up.

Back to the top of the order in the sixth, Carlevale led off with another single and started the scoring, with Travers and McCormack crossing the dish as well for a 9-6 lead. The Grays held Dirigo to one more run in the rest of the game (in the eighth inning) while tallying six of their own in the eighth and one more in the ninth. The big eighth inning featured offensive production from second baseman Mike “Banquet” Swanson (single), Loggy (single), and another double off the bat of centerfielder McCormack. Final tally: Providence 16, Dirigo 7.

Game two saw Dirigo strike first and plate one run, followed by a three-run opening frame for the Grays with RBI from Kai Henson (right field), Duggan, and McCormack. Dirigo tied it up with two runs off Bones’ hurling, but Providence responded with two runs in their half, with singles and runs scored from Oppy and Bones Henson. Maine took the lead back in the third, driving in three aces, but the Grays would not acquiesce and pushed two more across with RBI from Bones Henson and Carlevale.

The game was tight throughout the remainder of the frames, with both teams seesawing back and forth in and out of a slim lead. Both teams failed to score in the fourth; each tallied a lone ace in the fifth, and both came up empty at the plate in the sixth for an 8-7 Providence lead going into the seventh. Bones and the defense held Maine scoreless in that frame then opened up the offense, plating four aces, with Duggan, McCormack, Banquet, and Bones each touching the disk before the third hand was put down. Facing a 12-7 deficit going into the eighth inning, Dirigo found some life and struck well against Bones, putting two more across and holding the Grays to make it 12-9 after eight full. The Providence defense came up strong in the top of the ninth and held off a rally to keep the score right where it was, 12-9 for the final, as Providence enjoyed a sweep on the day. 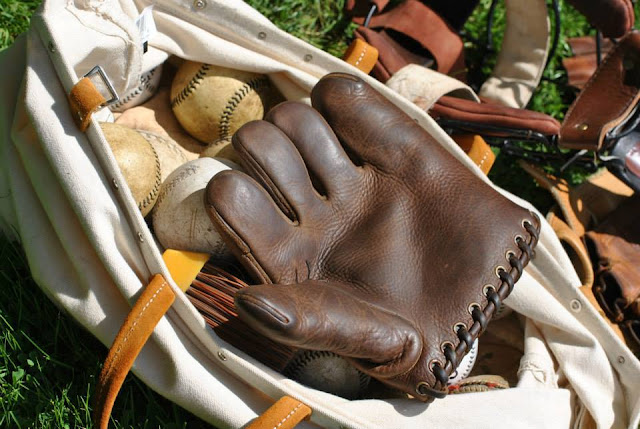 Providence vs. Boston Beaneaters, Boston Common, September 7
This Saturday, September 7, the Grays will enjoy the metropolitan setting of Boston Common as they square off with the Beaneaters for an ‘86/’64 doubleheader beginning at 10 a.m. The second meeting of the clubs this season will feature overhand pitching in game one (1886) and the older style in game two (1864). Come out to keep the spirit of the season alive as we turn the corner toward the final stretch with cooler weather and but still-hot action. Follow along on the Grays Facebook page and at ProvidenceGrays.com.