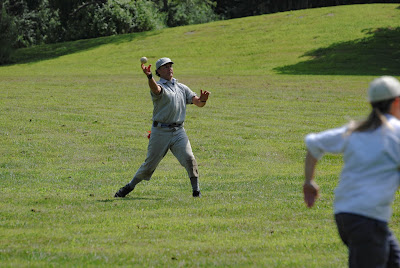 OLD BETHPAGE, N.Y. – The Grays squad traveled to Old Bethpage on Long Island for the Doc Adams Old Time Base Ball Festival (Aug. 3-4), winning three of their four games to improve to 20-10 on the season. Providence defeated the host Mutuals of New York in game one (1864) on Saturday by a score of 13-9, then came up short in the 1895 contest against the Mountain Athletic Club 18-16. On Sunday, the Grays held on for a 16-15 victory over the Eckford BBC of Brooklyn in an 1865 match, then recorded the twentieth win of the season with victory over the Wheelmen of Westfield, Mass., 19-5, playing by the rules of 1864.

This Saturday, August 17, Providence will host the first-ever Rocky Point Historic Base Ball Festival at Rocky Point State Park in Warwick with five games on two fields throughout the day. The event will begin with an opening ceremony at 8:45 a.m. Admission to the festival is free. 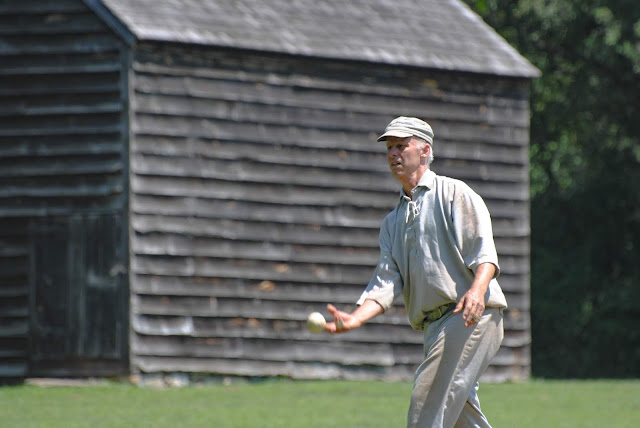 In game one at Old Bethpage (Saturday, Aug. 4), the Mutuals struck first and jumped ahead with two runs scored, while Providence managed to get one back in their first session.  The Grays’ bats came to life in the third, as they scored six times on base hits from center fielder Kai Henson, captain/first baseman Brian Travers, short stop Tony McClellan, left fielder Jamie Maynard, pitcher Jon “Bones” Henson, and a double each from third baseman Greg Smith, and right fielder Zach “Wild” Oppenheimer. Meanwhile, the Grays defense behind Bones’ pitching held New York scoreless to fix the score at 7-2 Grays after five.

Center fielder Connor Pirruccello-McClellan and catcher Johnny Carlevale each tallied an ace in the sixth, followed by four more Grays runs in the eighth off hits from Connor, Carlevale, short stop Aidan Pirruccello-McClellan, Maynard, and a sacrifice bounce out to center from Bones. The Mutuals rallied, scoring 6 runs across the final three frames, but the Grays held on for the 13-9 victory.

Game two was a much-anticipated matchup between two overhand clubs in an 1895 contest, and the teams did not disappoint. The Mountain Athletic Club started hot and led 2-0 after the first inning. Providence got on the board in the second when left fielder Aidan Pirruccello-McClellan hit a fast ball hard for a triple, and second baseman Bones Henson brought him in on a sacrifice to third. MAC tallied an ace of their own in the third inning, but the Grays unloaded, scoring six times off base hits from short stop Mike Duggan, pitcher Kai Henson, right fielder Johnny Carlevale, and a 3-RBI double off the bat of Bones Henson. 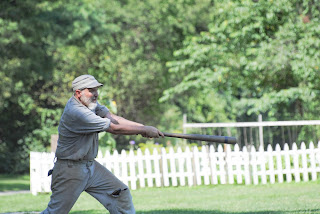 Providence held what seemed to be a controlling 11-3 lead after six full innings, but MAC was just getting started, as the New Yorkers plated 11 runs in the seventh to take a 14-11 lead going into the final stretch. Providence got two back in their seventh to cut the margin to a single tally, but the Providence bull pen was challenged by the MAC bats, as they put across three more in the eighth and one in the ninth to make it 18-13 MAC as Providence came to the plate in the final session. The Grays scored three quick runs with singles from Tony and Aidan, followed by two quick outs. With bases loaded, a passed ball tempted Bones Henson to steal home, and the game ended with the high drama of a putout at the plate. MAC 18, Providence 16.

Sunday (Aug. 4) started with an 1865 matchup with the ever-tough Eckford BBC of Brooklyn. Providence jumped out early in this one, taking a 4-2 lead in the first off base hits from pitcher Tony McClellan and short stop Mike Duggan and a double from catcher Aidan. The Ecks scored three times in the second and twice more in the third while the Grays added three in their third inning (Duggan, double; Dave Oppenheimer, Aidan, and Bones, singles) to fix the score at 7-7 after three. Tony McClellan’s pitching held Brooklyn scoreless over the next two innings as the Grays increased their runs, scoring one in the fourth and five times in the fifth (including another double from Duggan and base hits from Travers, Oppy, and T. McClellan). With three more Providence tallies in the sixth matched by three of their own for the Ecks, the score stood at 16-10 Grays going into the final inning. Brooklyn rallied hard and put up five runs in their final frame before Providence recorded the final out to survive with a 16-15 victory. 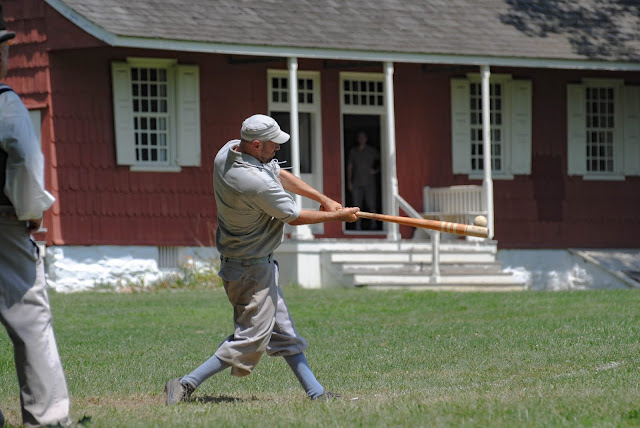 The final match of the weekend saw the Grays in action for an 1864 contest with the Westfield (Mass.) Wheelmen. Catcher Johnny Carlevale led off for Providence with a double in the first and scored on a Travers’ sacrifice. Duggan recorded a base knock, and G. Smith smacked another double, and the Grays to a 4-0 lead after one. A six-run Grays third inning featured singles from Oppy, Dave “Grandpa” Watson, and Carlevale, and a double from Zach Wild. Meanwhile, the Grays behind Bones in the box held the Wheelmen scoreless through the first four innings to give Providence a 10-0 lead. Westfield plated one in their fifth before Providence heated up again, scoring six more on singles from Maynard, Aidan, and Grandpa, and doubles off the sticks of Travers and G. Smith. Westfield managed two runs each in their eighth and ninth innings, but the Grays kept the offense rolling in their last session, plating three more to fix the final at 19-5 in favor of the Rhode Islanders. 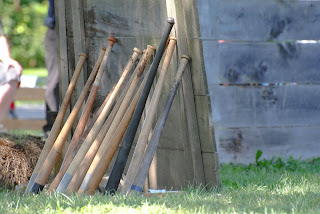 This Saturday, August 17, the Grays are excited to present the first Rocky Point Historic Base Ball Festival at Rocky Point Park in Warwick from 8:30-4. Providence welcomes the Connecticut Bulldogs, New York Mutuals, Boston Union, and Dirigo BBC of Maine as they inaugurate this festival by the bay. Come early for the opening ceremony at 8:45 a.m. featuring father and son former MLB players (and Rhode Island baseball legends) Dave and Mike Stenhouse. Bring some chairs, a blanket, and a picnic lunch. Admission to the festival is free.

Follow the action as the Grays head into the final stretch of the 2019 season on our Facebook page and at ProvidenceGrays.com.