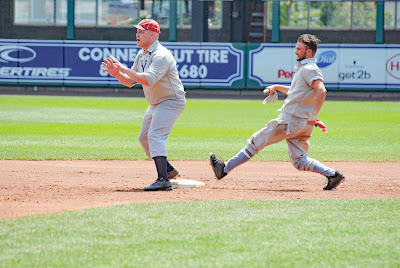 HARTFORD, Conn. – Sunday, July 28, was a hot one in Hartford, but it didn’t keep the Connecticut Bulldogs and Providence Grays from taking the field at Dunkin’ Donuts Park for an 1884 exhibition before the Yard Goats faced off against the Rubber Ducks of Akron. The historic teams managed to get three innings complete before the Double-A match-up, and the Grays left off with a 6-3 lead. The event served as a cordial warm up in the heat, as both teams prepare for the journey to Old Bethpage Village Restoration on Long Island this Saturday and Sunday (Aug. 3 & 4) for the celebrated Doc Adams Old Time Base Ball Festival.

On Saturday, Providence takes the field at the Hewlett Grounds for an 1864 match with the host Mutuals BBC of New York (10 a.m.), then finishes the day with an overhand game (1895) against the Mountain Athletic Club of Fleischmanns, New York, starting at noon. Sunday’s doubleheader opens with an 1865 game on Schenk Field with the Eckford BBC of Brooklyn and closes with another 1865 matchup with the Westfield Wheelmen of Massachusetts, starting at 1:15. 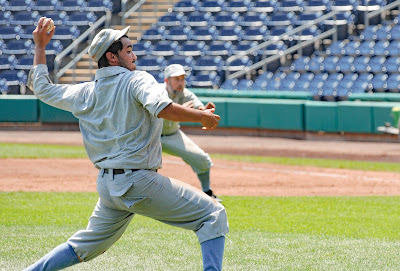 July 25 was Celebrate New Haven Day at Dunkin’ Donuts Park, so it was a fitting match-up to have the Bulldogs in the house to face the Grays. CT struck first, and pitcher Mike “Banquet” Swanson and his defense behind him secured two quick outs before a couple of Grays errors allowed the Bulldogs to take the early lead, 2-0. Providence got on the board in their first when captain Brian Travers reached base on an error, and Banquet helped his own cause with an RBI single to bring him home.

Kai Henson took over pitching duties in the second inning, and the Bulldogs added another run to make it 3-1 after one and a half frames. The Grays plated two runs in the bottom, however, as pitcher Henson reached first on a Bulldogs error. Second baseman Jon “Bones” Henson struck a hard line drive to second to score K. Henson, then scored from second base on Ryan “Loggy” Logsdon’s at-bat to tie it up 3-3 after two innings. Short stop Johnny Carlevale also recorded a single in the second before the side was retired. After holding the Bulldogs scoreless in the top of the third, captain Travers led off in the Grays half with a sweet double down the right field line then scored when Banquet reached first on an error, who ultimately tallied another ace on an RBI ground out to second from K. Henson. Third baseman Greg Smith reached first and scored on left fielder Jamie Maynard’s at-bat to fix the abbreviated final at 6-3 in favor of Providence.

This Saturday (Aug. 3), the Grays look forward to the always tightly-contested match with their friends the Mutuals in their 1864 weekend opener and are excited to take the field for a rare 1895 game with the gents from Fleischmanns, New York, in game two. Sunday (Aug. 4), the Ecks will pose their usual lofty challenge for the Rhode Islanders in an 1865 (no bounce) rule meet-up, and the Westfield squad will offer a final hurdle to the Providence nine following these same rules. If you’re on Long Island this weekend, the Doc Adams Festival is calling your name. The event features a total of 11 different clubs across two days from New York, Connecticut, Rhode Island, and Maryland, and the Old Bethpage Village Restoration provides the ideal setting to watch some historic ball games. Follow the action on the Grays Facebook page and at ProvidenceGrays.com.