Grays Look for Rebound After Tough Tangles With Brooklyn 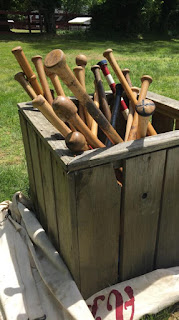 PROVIDENCE, R.I. – The Providence Grays squared off with the Long Island-based vintage powerhouse Brooklyn Atlantic squad in four games across two Saturdays (Jun. 8 & Jun. 15), walking away with a single win as they move to 10-6 on the season. This weekend (Jun. 22 & 23), the Rhode Islanders will travel to Rising Sun, Maryland, to take part in the 3rd Annual Weekend at the Winery, facing the host team Rising Sun BBC and the Mutuals of New York on Saturday and finishing up the weekend with a match each against the Mutuals and the Brandywine BBC of West Chester, Pennsylvania.

On June 8, the Grays traveled to the Village of the Branch in Smithtown, N.Y., to join Brooklyn in celebrating Old Dutch Day, an event that honors the legacy of Al “Old Dutch” Dieckmann, a major contributor to the emergence of historically accurate 19th century play whose spirit lives on in the clubs that take the field today.

The first game of the day was played by the rules of 1864 and opened with a 3-0 lead for the hosts after the first inning. Providence rebounded and cut the deficit to one with a pair of tallies in the second on RBIs from Kai and Jon “Bones” Henson. Then, with one out in the third, the Grays went off with five-straight batters reaching base, led by an RBI double from Greg Smith, for four runs and a 6-3 advantage. 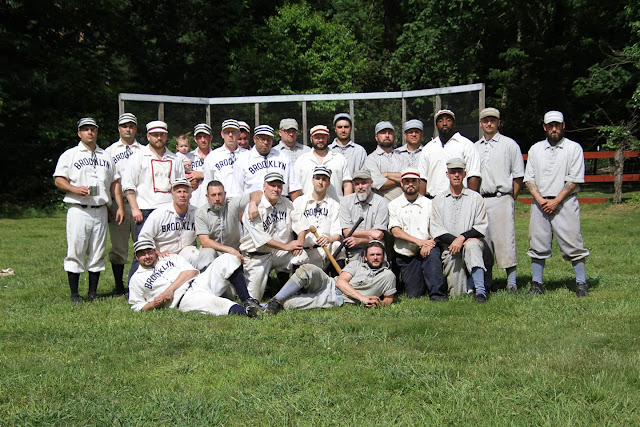 Things remained close with both clubs putting up runs in the fourth as Brooklyn plated four of their own while the Grays kept the lead (8-7) with two tallies on another Smith double. The Atlantic went on to take control with five scores across the sixth and seventh to go up 12-8, and a late Providence rally, including an RBI off the bat of Captain Brian Travers, came up short as they lost by two in a hard-fought outing.

Game two of Old Dutch Day featured 1884 overhand play and a back-and-forth battle ensued, beginning with Brooklyn taking a 5-1 lead after the first after a pair of walks and some defensive mishaps. Catcher Tony McClellan led off with a double in the second and later came around to score making it 5-2, and that score would hold after a scoreless third inning. 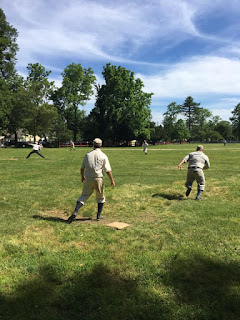 A four-run Providence fourth led to a quick lead behind a double from pitcher Kai Henson and singles off the bats of Bones, McClellan, and leadoff hitter Johnny Carlevale. The Atlantic quickly bounced back, however, with two big innings for a 13-6 edge after five. The Rhode Islanders didn’t quit and chipped away with three in their next at-bat, including RBIs from Mike “Banquet” Swanson and Aidan Pirruccello-McClellan.

The Grays added two more in the seventh and regained the lead with four runs in inning eight after three-straight singles for a 15-14 edge. They added another insurance run in the ninth and Henson battled on the mound, holding Brooklyn scoreless in the bottom of the ninth for the team’s tenth victory of 2019.
~~~~~~~~~~~

The second weekend of games against Brooklyn took place at the Bristol Town Common (Bristol, R.I.) on June 15 as part of the Bristol Fourth of July Committee’s annual celebration. Game one was an 1864 contest in which the Grays started hot with six runs in the opening frame as Connor Pirruccello-McClellan, Travers, Smith, Tony McClellan, Bones, and Kai Henson all came around to score.

Henson scored his second run of the game in the third for a 7-3 advantage and the Grays maintained a 7-5 lead after five full. The tides turned quickly, though, as Providence was limited to just one run over the rest of the game—an RBI single for Tony McClellan, driving home Banquet in the seventh—and  the Brooklyn offense got better as the game went along, carrying the visitors to an 18-8 triumph. 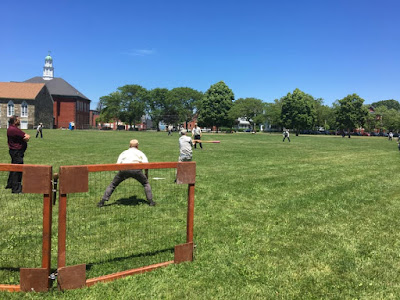 Game two was played by the rules of 1865, and Providence jumped out early, starting with a Carlevale leadoff triple and an RBI single for Travers, scoring Johnny from third. A single for Jerry McCormack and a double each for Smith and Dave “Oppy” Oppenheimer tallied two more aces to give Providence a 3-0 head start. The Atlantic answered back with five runs of their own in the first and seven more across the second and third to give the visitors a commanding 12 to 3 lead after three full.

The Grays managed to hold Brooklyn to just two more runs over the middle innings. In the Providence fourth, Oppy opened up with a single followed by a Bones double, each scoring on RBIs from Jamie Maynard and Kai Henson. Providence added two more in the fifth as Connor and McCormack scored with doubles off the bats of McCormack and Bones. T. McClellan’s single and run scored in the sixth fixed the score at 14 to 8 with three innings left to play.

Providence went scoreless in the seventh while Brooklyn added four to bolster their position further. The Grays’ bats came alive in the eighth, with four aces tallied off singles by Carlevale and Maynard and doubles from Captain Travers, Connor Pirruccello-McClellan, and Tony McClellan. The Atlantic answered right back in their eighth, plating four to keep the distance they had already established. 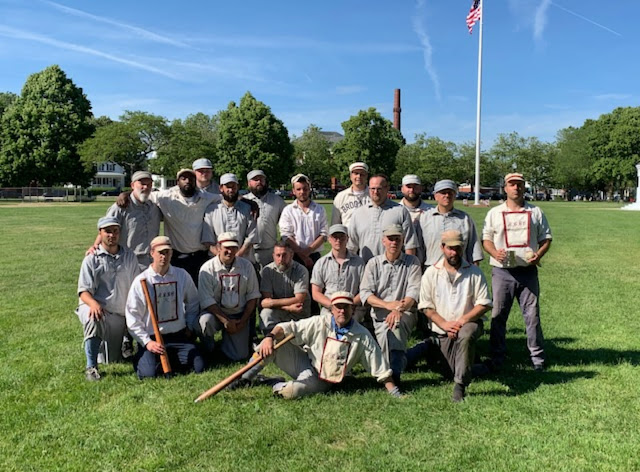 Down 22 to 12 in the top of the ninth, the Providence bats proved unwilling to cede the day without a final rally. A string of singles from Oppy, Bones, Maynard, and T. McClellan, a double for Carlevale, and another single from Travers, plated six runs to close the gap to four before the Atlantic were able to record the third and final out: Brooklyn 22, Providence 18.

The Grays will face their friends the Mutuals of New York on both Saturday and Sunday (Jun. 22 & 23), as both clubs from the Northeast make the trek to Maryland for a Weekend at the Winery, hosted by the Rising Sun BBC. Providence will also see action with the host team and the Brandywine BBC of West Chester to make for a full weekend of base ball and camaraderie. Follow the action on the Grays Facebook page and at ProvidenceGrays.com. 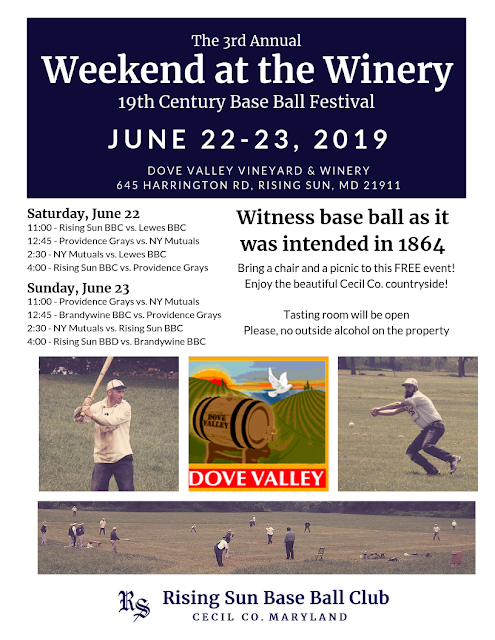