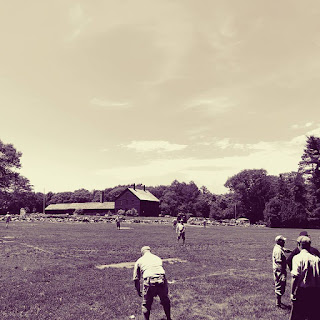 COVENTRY, Conn. -- The Providence Grays vintage base ball club traveled to the Nathan Hale Homestead on Saturday, June 30, and walked away with two victories against a Connecticut Picked-Nine squad to improve to 13-7 on the season. Despite a rough patch in June, the Grays have now taken three matches in a row as they enjoy a mid-summer break before reconvening in Gettysburg for the annual National Base Ball Festival July 21-22.

In Coventry last Saturday, Providence brought their A game, playing impeccable defense and supporting their efforts in the field with solid performance at the plate to bring home a sweep of the day's matches. Connecticut struck first in game one and the lead-off batter knocked a triple into left field, which was the toughest position to play at the venue, as two stone walls and a road cut through the Garden behind third base. Despite the strong CT start, Providence held the home squad to one tally in the opening frame. A lead-off single from Johnny Carlevale, followed by hits from Mike "Defense" Duggan and Greg Smith, led to a two-run Grays first inning, giving them the early lead. 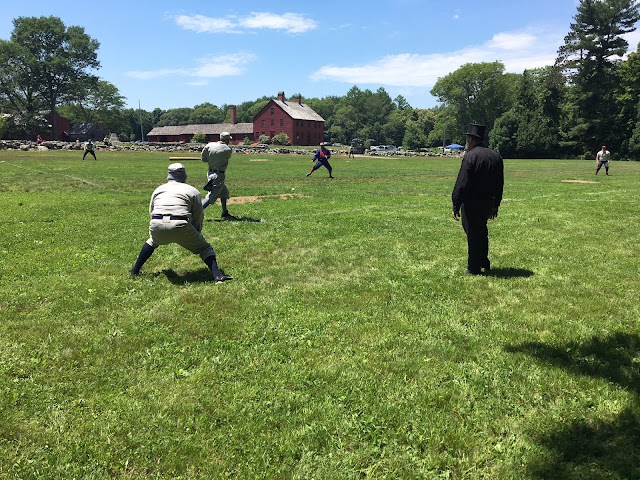 Providence picked up two more runs in the third as several Grays batters drew walks, while Connecticut tallied five runs in the third and fourth innings to keep things interesting. The Grays broke the game open in their fourth, however, as a lead-off single from Jon "Bones" Henson started a rally with Dave "Taco" Watson, Carlevale, Captain Brian Travers, Duggan, and Aidan Pirruccello-McClellan all singling and driving in runs. Catcher Greg Smith walloped  a triple as well, and the Grays plated seven to increase their lead to 11-6 at the top of the fifth. Connecticut came back strong, scoring three runs in the fifth inning, but Providence got those back in their half of the frame, as Jerry McCormack led off with a perfectly-placed fair/foul single, followed by more production from Carlevale and Duggan. Mike "Pops" Smith stole home and scored on a throw down to second in the bottom of the sixth, and the Grays tacked on a couple more tallies in late innings as they held CT scoreless for the remainder of the game for a final score of 16-6. The local crowd on hand was delighted with some stellar defensive action from the Grays during game one, with Tony McClellan moving perfectly with a screaming line drive down the third base line and coming up with the hand on the fly. Mike "Defense" Duggan continued to earn his moniker with astonishing defense throughout. Game two ran through five innings before getting called, as the Grays had mounted a solid lead and the heat and humidity continued to make its presence known for all in attendance. Providence struck first in the second match, and jumped out quickly with a big hit from Duggan, scoring two in the opening frame. Connecticut came right back with three tallies of their own to take a 3-2 lead after one. McCormack knocked a single down the third base line to get the production started in the second inning, and the Grays ultimately tallied 5, while holding CT to 1 for a 7-4 score after two full. Providence could not send any runners home in the top of the third, and the Picked-Nine threatened in their half of the frame with big hits, but stranded their runners without a single tally to preserve the score into the fourth inning. From there, the Grays finished off the day in the top of the fourth, adding four more runs highlighted by a 2-run single from Greg Smith and an RBI from Aidan Pirruccello-McClellan. One more inning was all that anyone could ask for in the heat of the New England summer, and the match ended with an 11-4 Grays victory. Mike "Pops" Smith pitched all frames for Providence on the day and held his opponents to 10 runs vs. the Grays 27. 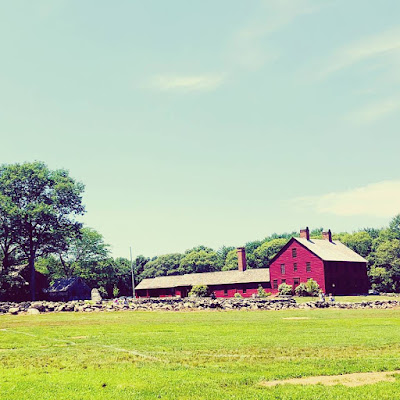 Providence will enjoy mid-summer festivities and report refreshed and ready to win on July 21-22, as the team travels to Gettysburg, PA, for the 9th Annual National 19th Century Base Ball Festival, held on the grounds of the Schroeder Farm, 965 Pumping Station Rd, just a stone's throw from the battlefield. On Saturday the 21st, Providence will face the Monmouth Furnace BBC at 10:15 a.m., followed by a match against the Cincinnati Red Stockings at noon. On Sunday the 22nd, the Grays will square off against the Rising Sun BBC at 8 a.m. and finish up the weekend against the Talbot Fairplays at 9:45. If you've never visited Gettysburg, this festival provides a wonderful opportunity both to see the ground that is sacred to our nation's history as well as to witness some of the best vintage base ball in the country.