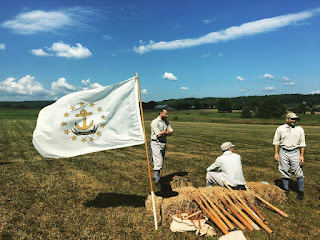 PROVIDENCE, R.I. -- Looking to improve upon a 17-15 campaign in 2017, the Providence Grays base ball club is set to open their 2018 slate with a pair of matches against the Boston Beaneaters on Saturday, April 28, at Milot Field in Rehoboth, Mass.

There will be two games of differing time periods, beginning with a contest played by 1884 rules at 11 a.m. Then, the clubs will wrap up the day playing by the standards of 1871, set to begin soon after the conclusion of game one.

Providence looks ahead to a 42-game schedule this year, a significant increase in outings compared to recent seasons. Their opener this weekend is followed by a trip to Smithtown, New York to play four games across two days in the Atlantic Festival next Saturday and Sunday, May 5 and 6, hosted by the Atlantic Base Ball Club of Brooklyn.