REHOBOTH, Mass. -- In their inaugural outing of the 2018 season, the Providence Grays base ball club (2-0) hosted the Boston Beaneaters (0-2) for a doubleheader at Milot Field in Rehoboth, Massachusetts, on Saturday afternoon (Apr. 28). The teams dueled in a game played by 1884 rules followed by an 1864 contest, with Providence taking 16-13 and 18-13 victories respectively. 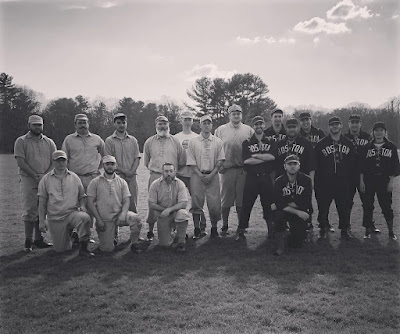 Game one began as a back-and-forth battle with each side consistently matching each others' offensive output in the early innings. The Grays' scoring was highlighted first by a three-run third inning in which starting pitcher Kai Henson drove an RBI-double to right field and later scored to build momentum. Then, the hosts put together a six-run sixth, as captain Brian Travers started things off with a base hit and later scored, while right fielder Drew Ewing concluded the rally with a perfectly placed two-out single down the right field line.

Defensively the Grays had to shake off some rust, but Henson was able to retire the side fanning six over the first two frames. The Boston hitters came into the game with an aggressive approach at the plate, running up the pitch count with a plethora of foul balls and consistently putting the ball in play to induce defensive mistakes. A standout of the Grays' scrappy defensive showing was catcher Tony McClellan who, despite some long innings behind the plate with the pitch count around 200, put forth an outstanding effort as the backstop.

Providence batted first in the second half of the twin-bill and got off to a hot start in the top of the opening stanza as Travers and shortstop Mike "Banquet" Swanson notched back-to-back singles and Henson followed with his second two-bagger of the day in a five-run inning. The Beaneaters hung around, however, plating two in the second and one in the third, but they trailed 7-3 after six full.

The Grays went down one-two-three in the seventh but caught stride in the eighth as Jon "Bones" Henson picked up an RBI single and third baseman Jerry McCormack stepped up next with a well-placed double to right center en route to a five-run frame. They led 12-9 entering the last half of the ninth, but Boston scraped together three tallies to force free base ball.

Providence wasted no time in the top of the tenth with a Bones Henson base hit up the middle sparking six-straight knocks highlighted by a double from center fielder Connor Pirruccello-McClellan. On defense the Grays were spearheaded by a handful of putouts and quality range in left field from Johnny Carlevale and a rock-solid performance at the hot corner by McCormack.

Next up, Providence takes their talents to Smithtown, New York, for four games over two days at the Atlantic Festival on May 5 and 6, hosted by the Atlantic Base Ball Club of Brooklyn.