Grays Look for Wins in Season Finale with Brooklyn

PROVIDENCE, R.I. – After dropping two games against Hingham on October 7, Providence (23-12) heads into the final event of the 2018 season, a doubleheader tomorrow (October 20) with the Brooklyn Atlantic (35-8) on the Town Common in Salem, Mass. First pitch is 10:45 a.m. 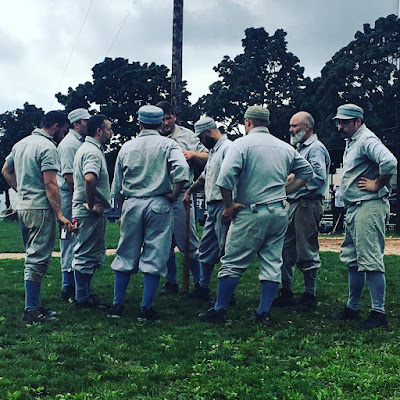 The Grays traveled to Marshfield, Mass., on Sunday, October 7, as the Hingham Coopers hosted an 1864 doubleheader as part of the ‘Explore Marshfield’ events. Providence came up short in both games, handing Hingham a 20-15 win in game one, then coming up well short in a 37-18 loss in game two.

Providence tallied a single ace in the first inning of game one, with Mike “Defense” Duggan reaching first and stealing two bases before being driven home by Greg Smith in the cleanup spot. Hingham came out hot in their first frame, establishing a blistering pace for the day, scoring three to take the early lead. They would plate two more in their second before Mike “Pops” Smith held them to those five tallies through the first four innings. Meanwhile, Providence chipped away at the lead, with two runs scored in the second by Jon “Bones” Henson and Drew Ewing, then tied it in the third with a sac fly off the bat of G. Smith, scoring Captain Brian Travers from third. Hingham came back heavy in the fifth, tallying five aces off solid hitting. The Grays cut into the lead in their sixth, with Henson, Ewing, and Johnny Carlevale each crossing the plate to bring the Rhode Islanders to within three, 10-7. The middle innings saw the Grays squander some scoring opportunities as the result of baserunning missteps that would ultimately prove costly to Pops Smith’s stellar pitching efforts.
Providence added two in the seventh and two more in the eighth, highlighted by G. Smith’s double and singles from Mike “Banquet” Swanson, Henson, and Carlevale, a sacrifice bounce-out from Pops Smith, and three walks given up by the Hingham pitcher. Hingham took advantage of their seventh and eighth frames to add ten more runs, holding Providence’s rally to four in the top of the ninth to take the 20-15 decision. 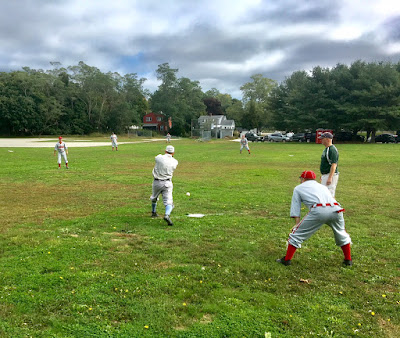 Game two saw Providence off to a strong start early, with four runners crossing the plate in the first, only to see Hingham take the early lead, 5-4 after one. The Grays added three more in the second, as Hingham slowly built their lead over the early innings, with a handful of tallies in each of the first four frames to claim an 18-11 lead after five. Hingham found Bones Henson’s inside strikes in the sixth and went off, scoring fourteen more on deep drives coupled with defensive mistakes to build the insurmountable lead. Providence would not give up, though, and worked hard for two runs each in the sixth and seventh, highlighted by a G. Smith double and a Jerry McCormack triple, along with base knocks from Carlevale and Banquet. The Grays held Hingham to five runs through the remainder of the match with Travers taking over pitching duties. Providence would not give up in the face of the large deficit, scoring three runs in the ninth, including a Travers solo home run to emphasize the squad’s perseverance. 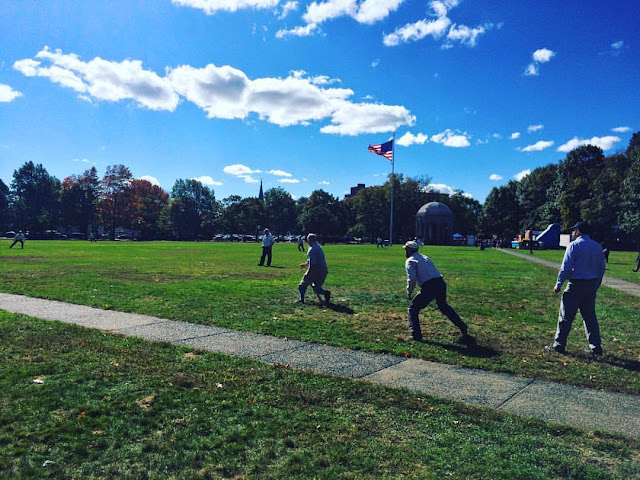 The final doubleheader of the season will be a treat (with a few tricks mixed in), as the Rhode Island club hosts their friends from Brooklyn for an 1864 doubleheader on the Salem Town Common, in the midst of the seasonal festivities for which the town is well-known. Come out for a day of base ball and then explore the fun carnival atmosphere of Salem in October. First pitch is 10:45 but plan to arrive early to begin your search for parking.