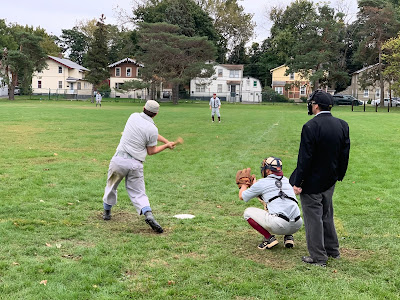 PROVIDENCE, R.I. – For the first time in modern Grays history, the Rhode Island squad surpassed 30 wins in a single season, driven by an 11-game win streak since August 17, capped by a sweep in Hartford on October 6 with the Wheelmen of Westfield and the Connecticut Bulldogs. Providence will look to finish the season with two more victories this Saturday, October 19, as they face their friends the Atlantic Base Ball Club of Brooklyn in the annual season finale on the Town Common in Salem, Mass. First pitch is 11 a.m.

Showdown at Colt, October 6th
Game one at Colt Meadows in Hartford on October 6 featured an 1884 match-up with a powerhouse overhand club, the Westfield Wheelmen. The Grays struck first and came out flat but also managed to keep Westfield from scoring in their first frame for double zeroes heading into the second. Providence broke things open in the top, scoring three runs when short stop Mike Duggan led off with a single, left fielder Connor Pirruccello-McClellan followed up with a base on balls, and third baseman Dave “Oppy” Oppenheimer knocked a single to give the Grays the first lead of the game. Westfield got one back in their at-bats to make it 3-1 Providence early. 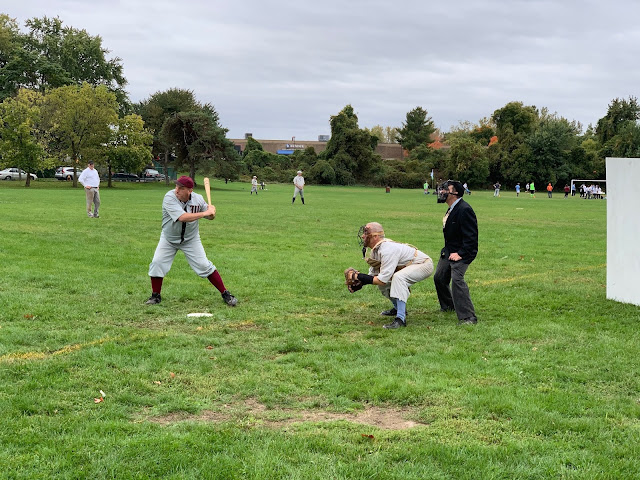 Despite an effort by pitcher Mike “Banquet” Swanson to help his own cause with a base hit in the top of the third, the Grays were held scoreless in the frame, while Westfield awoke, plating five aces in the third, then holding Providence scoreless once again in the fourth and tallying an additional ace to take a 7-3 lead going into the fifth inning. Providence accepted this challenge, scoring four runs of their own in the top of the fifth, with captain Brian Travers (first base) banging out a single and short stop Duggan adding a double to knot the score at seven at the midway point. Westfield added two more in the bottom of the fifth to regain the lead temporarily before Providence returned to the plate in the top of the sixth and unleashed for six runs featuring singles from Travers, Banquet, Connor, and third baseman Jerry McCormack and another double off the bat of Duggan. Westfield tallied another ace to make it 13-10 Grays after six full.

The top of the seventh found Travers swinging hard for a double, followed by base hits from Banquet and Duggan, adding another tally for the Rhode Islanders, but Westfield would not sit idle, scoring four aces in their seventh to knot the score at 14 all heading into the final stretch. Connor led off in the eighth with another single, followed by additional base knocks from McCormack and second baseman Ryan “Loggy” Logsdon before right fielder Zach “Wild” Oppenheimer doubled. Providence regained the lead with 16 total tallies then held the Wheelmen scoreless in their final two chances to fix the final, Providence 16, Westfield 14. The game was win number 30 for the boys in gray on the 2019 season. 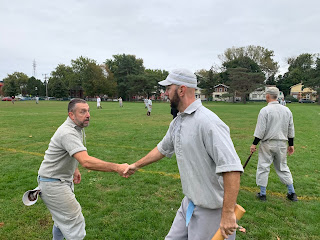 Game two was an 1864 matchup with the host team Connecticut Bulldogs, who swung first and scored three quick aces off Jon “Bones” Henson pitching to get things started. Providence jumped into the fray, scoring two in their opening frame, with a leadoff single from catcher Johnny Carlevale and a base on error from Travers, who both touched the dish to bring the Grays within one, 3-2 after the first inning. Both teams’ defense kicked in, holding each other scoreless in the second and third innings, before Providence broke through with a three-run fourth, with singles from Carlevale and Duggan and a double from Travers. The fifth inning saw a reversal of fortunes, as the Bulldogs touched the dish four times while holding the Grays scoreless to take a 7-5 lead just past the halfway mark.

Bones and the defense kept Connecticut from scoring for the remainder of the match, while the Grays’ offense chugged along. Providence added three more in the sixth off hits from Carlevale, Travers, Oppy, and McCormack, then went off in the seventh, tallying 11 aces, with the Grays’ batters getting multiple plate appearances, with multiple hits off the bats of Carlevale, Travers, and Loggy. Providence added no more in the eighth, but the damage was done, and when the final Bulldog batter was retired in the top of the ninth, the score was finalized. Providence 19, Connecticut 7, for the 31st Grays victory on the season. 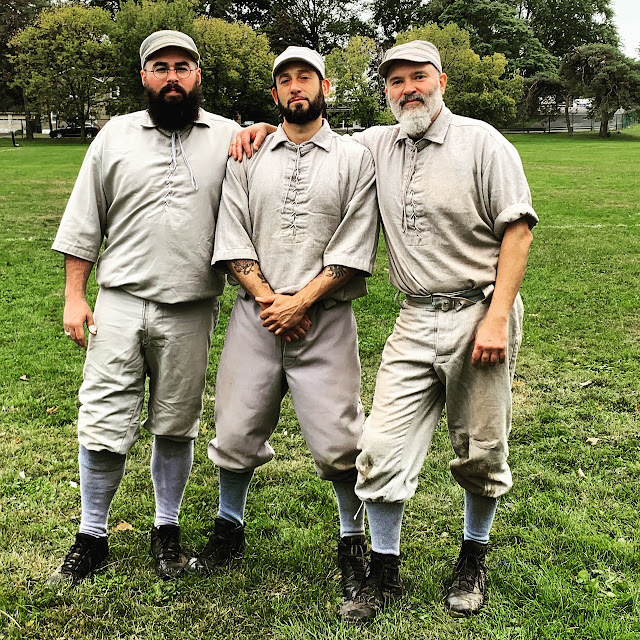 Providence vs. Brooklyn, Season Finale, Salem Town Common, October 19th
This Saturday, October 19th, the 2019 season will come to a close for two of the Northeast’s best rivals. Providence and the Brooklyn Atlantic will continue their tradition of wrapping their seasons as they face off on the Town Common in Salem, Mass., at the height of the Halloweeen festivities. Both squads are looking to extend their win totals as both look to close out a successful 2019 campaign, so the rivalry will feature a friendly sincerity that will hold these teams in good stead as they head into the long winter. The matches will both be played by the rules of 1864. First pitch is 11 a.m. but come early to find a good parking spot. Follow the late-season action on the Grays Facebook page and at ProvidenceGrays.com.